To assign permissions in SharePoint, you make one or more role assignments, which requires three things:

In this post, I’m going to explain the REST service calls required in order to make role assignments to SharePoint securable objects. I will show the calls using jQuery’s ajax (because I’m working through them in the console and the console won’t resolve promises). I’ll follow up with a post with some demo code pulling it all together and probably using fetch.

As explained above, there are three things I need to make a role assignment, and while these aren’t directly related to role assignments, this is a series on REST in general so I’m going to explain all of the service calls.

The first thing I will get is collection of lists that are available in the current site, via the endpoint /_api/web/lists. Now this endpoint basically returns the whole list schema, and I don’t need all of that, so to reduce the payload I’ll add $select=Id,Title as a request parameter. I also want to weed out hidden lists, so I’ll add $filter=Hidden eq false. With that, the call looks like:

I’ll use this data to populate some sort of multi-select control for lists and can then get a handle on each list by either id or title.

Next, I’ll need to populate a drop-down list with site collection groups. Again, I’ll add the request parameter $select=Id,Title, and while with lists I could have gotten away with just title, here I need both because add role assignment requires the id, and users are likely going to need the title. Here’s the call:

I’m not actually going to need this in the demo page, but to be thorough, if you know the name of the group, you can get it’s ID with this call (a lot less chatty):

And the response from this call is quite succinct:

And the final preliminary piece of the puzzle is that I need a role definition id. To get a list of role definitions defined in the site collection, I make the following call:

Now I didn’t actually select anything, so I’m getting back more information than I actually need, but it’s not that big a structure and I wanted to show the whole thing. In particular, note the base permissions structure. I talked about this a bit in my last post Determining the Permissions of the Current User with REST, and how to dissect this structure to get the granular access controls it represents. Anyway, here is the complete JSON structure returned from the role definitions endpoint.

The only things I actually need from this are the name and the id.

If you know the name of the role definition you’re interested in, you can get the id with the following REST call:

And the very simple returned JSON structure from this call looks like:

Whew! We finally have enough information to make a role assignment. It’s a bit tedious, but not that hard (which kind of describes programming in general). In the following code, I’m going to work on the permissions of the list titled “Speaker Evaluations”. And prior to doing anything, the permissions for that list look like this: 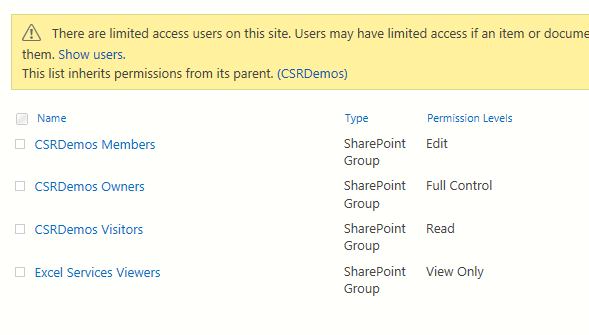 The first thing I need to do is check if the list is currently inheriting permissions. To do that, just like object model code, I need to call has unique role assignments like so:

Keep in mind that the part of the URL before /hasuniqueroleassignments is what I called earlier “a handle to a securable object”, in this case, a list. So I could just as easily use /_api/web/hasuniqueroleassignements, and the returned value would be in exactly the same format but would have told me if the web had broken inheritance. And I could do …/items(2)/hasuniqueroleassignments to determine if the item with id 2 has broken role inheritance. The same is true of all of the endpoints to follow in this post, they can all be tacked onto any URL that represents a securable object to perform securable operations on those objects.

Anyway, here is the returned value, which would be true if role inheritance had already been broken:

If the list is currently inheriting permissions, I now need to break role inheritance. I do that with the following call, passing in false. The input is true if I want to copy all of the role assignments from the parent and false if I want to start with a blank slate.

Which returns the terribly useful JSON structure shown below. Basically, if success gets called back, that’s enough to shout WOO HOO!

Yours will look a little different of course. I wouldn’t expect you to see permissions assigned to Joe McShea for instance ;). Breaking role inheritance with false just assigns full control to the current user to prevent orphaned objects.

This call just deletes all role assignments for the user I’m about to add role assignments for. That way, at least with respect to this one user, I always start with a clean slate. Curiously, this call returns nothing on success, just a blank string. not even a lousy { “object.null”: true }! One thing you need to know, however, is if the user has no role assignments, the result is a “404 Not Found”. This isn’t an error. You asked for a resource and it wasn’t found. So you should handle 404 errors as appropriate.

And finally, we’ve arrived at the point of this post, which is making a role assignment. The following service call adds a role assignment to the “Speaker Evaluation” list, which assigns Edit (i.e. roledefid=’1073741830′) to the SharePoint group “CSRDemos Members” (i.e. principalid=’9′).

And again we see this very useful structure. But again, the fact that the success callback was called is more than enough.

And now if I check the permissions for the list, I see:

In this post I showed the various pieces you need to navigate in order to assign roles to SharePoint groups using the REST API. In my next post, I’ll pull it all together with a demo page.