In this post I’m going to show how to determine the current user’s permissions using the SharePoint REST API. This is going to be a little different because I’m just going to run some commands in the JavaScript console, so this is mostly going to be a bunch of screenshots. But since you can’t very well copy and paste from my screenshots, I’ve also included all of the commands I’m going to run in a code block at the bottom of this post.

Now, to get started, I need to open the browser and navigate to a SharePoint site. Then hit F12 to launch the debugger (or whatever shortcut your browser supports) and tab to the console. I need to be on a SharePoint site already because I’m going to use the global _spPageContextInfo in order to make my commands generic enough to work anywhere and to avoid CORS concerns.

I also need to mention that I have jQuery loaded on every page in this site, so I’m going to use $.ajax to make the network calls. If you don’t have jQuery loaded, you’ll need to get it loaded if you want to follow along. You can do that any way you want, install it as a script link, load it in the master page, or add a content editor web part to your page. If you really don’t want to modify the page or site, you can run the following code in the console, which will load jQuery from a CDN just for this session (although some browsers might block this, works fine in IE).

In my last post I showed using fetch and said I’d probably be using it regularly in the future, so why aren’t I using it now? And also, I said I wanted to use fetch because I’ve grown used to using promises, but I’m not using them either. What gives? The answer to both questions is the same: promises DO NOT resolve in the console, so this would be a short and uninteresting post if I tried to use them.

Anyway, once you’ve navigated to a SharePoint site, opened the console, and made sure jQuery is loaded we’re ready to start.

Get the Current User 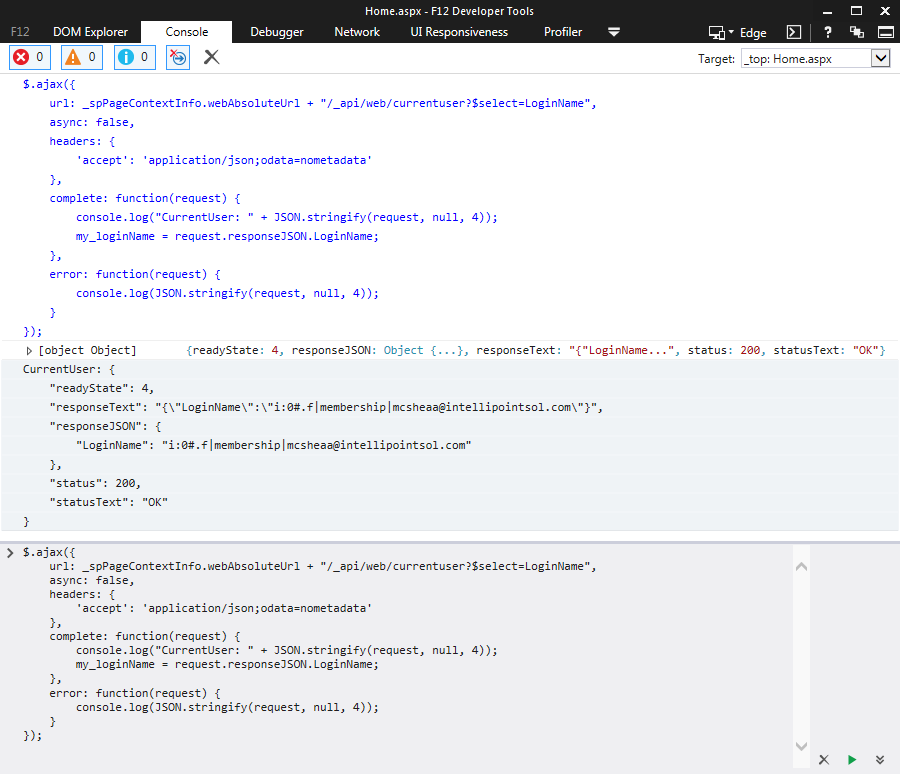 There isn’t that much to say here, but in no particular order:

The next thing I need to do is get the user’s effective permissions from the endpoint ‘/_api/web/getusereffectivepermissions’. I pass in the login name I got back from the call to the current user endpoint. Here’s the call: 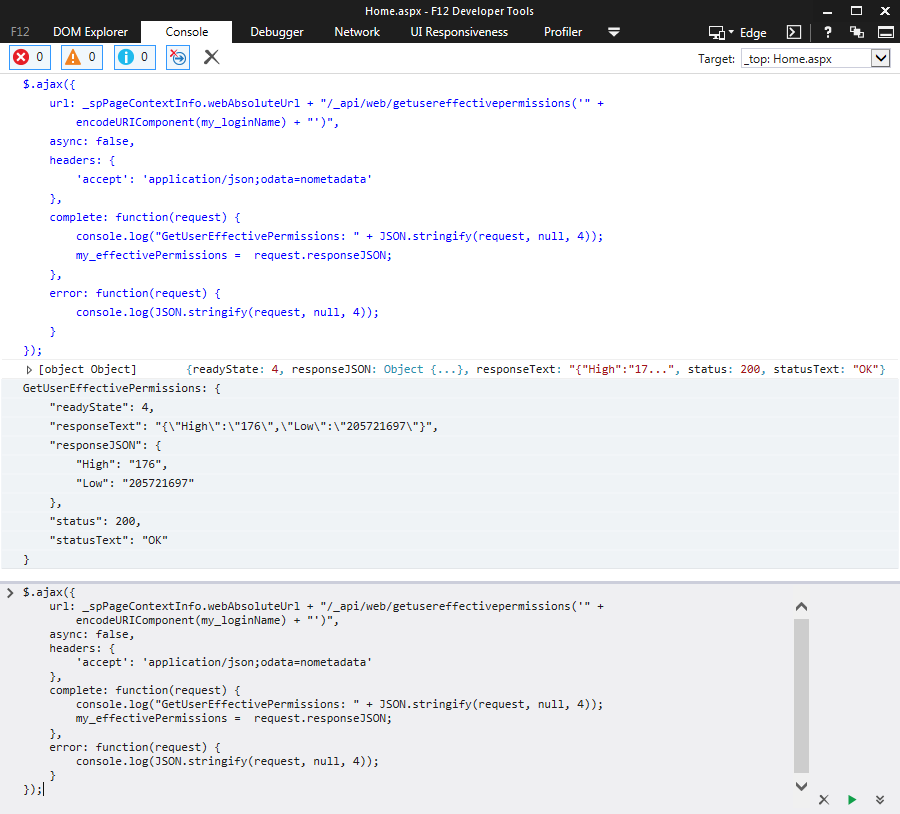 We’re now done with the REST API, in fact we’re done talking to the server. To make sense of the effective permissions we’re actually going to switch over to using the client object model, but only to use a helper class that helps interpret effective permissions. Nothing we do from here on which reach back out to SharePoint.

SP.BasePermissions is the helper class I’m going to use to make sense of the effective permissions. It has a handy initPropertiesFromJson method, which takes in the JSON object I just got back from ‘/_api/web/getusereffectivepermissions’.

Convert Permissions it to Friendly Names

Now that I have an SP.BasePermissions instance for the current user, I can call it’s has() passing in an SP.PermissionKind, and it will return true or false depending on whether the base permissions indicates the user has that particular kind of permission.

In the code below, I’ve looped through each permission kind, determined if the user has that permission, and if so added a user friendly string to an array of strings. At which point I can also check if a user has a permission with something like friendlyPermissions.contains(“browseDirectories”) (assuming my browser has Array.contains). 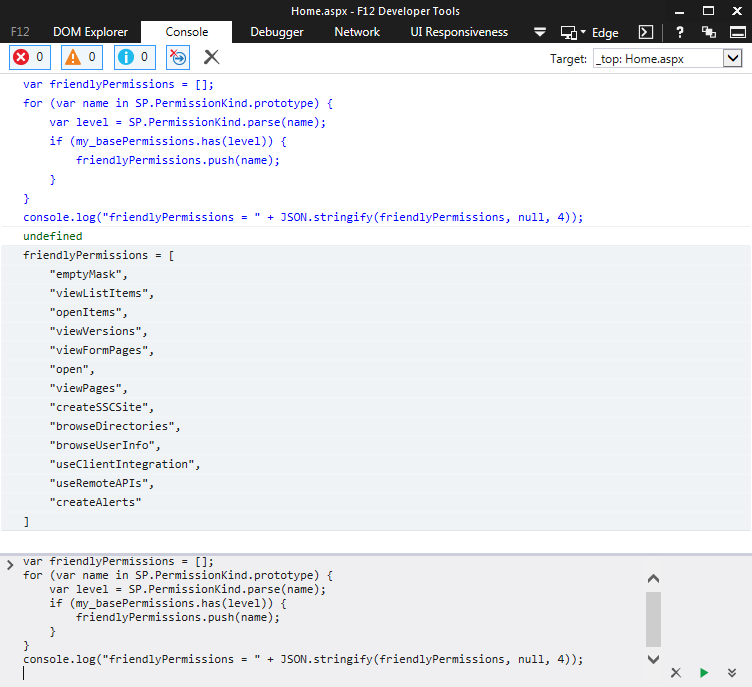 In client-side SharePoint solutions, we often want to tailor the user experience based on what the current user is allowed to do. This is one way to achieve that result using the REST API. Below is all of the commands I issued in the console screenshots above.

One thing that concerned me was can the average user call this even for their own permissions, or does it require “Manage Permissions”. “Manage Permissions” is required in order to call this for another user, but not to call on yourself. I don’t know what the minimum requirements are to call it, but the OOB Visitor Group and Read permission level are sufficient.