In this post, I’m going to show how to do basic CRUD (Create, Read, Update, and Delete) operations with documents and SharePoint RESTful web services. Along the way, I’m going to flesh out possibly the world’s ugliest SPA (single page application). I’m only going to talk about the parts of the code that deal with Ajax and the RESTful web services, but I’ll attach the complete source. It’s a wiki page, so you can just drop it in a document library and open it to see how it works (it does try to work with a picture library with a title of Pictures in the current site, if you don’t have one, you can either create one or change the listTitle variable to be the title of another picture library in your site).

What We’re Going to Build

Below is the basic interface. It consists of an un-ordered list of picture names, each with a radio button next to it. And at the bottom is a div that will act as a drop zone for files dragged onto it. This interface demonstrates create and read. The un-ordered list is populated by reading the list items in our Picture library, and you can create by dragging images to the drop zone.
I already have some images in the library. If you don’t, the un-ordered list will be empty and the only visible thing in the form will be the drop zone to add new files. I’m not actually restricting files to be images, you can drop any file on the zone and it will get uploaded. In fact, you can point to any document library instead of a picture list, except that some of the code expects there to be a Description field, which exists on picture lists but not normally on document libraries.

If you click on one of the radio buttons to select an image, a form opens up below the list which provides edit and delete functionality. 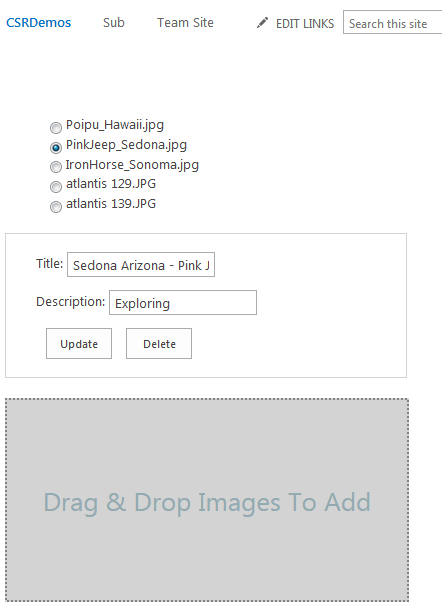 As I said, it’s not pretty, but this gives me enough interface to show the complete range of CRUD operations for SharePoint document libraries.

There is nothing special about the HTML, but since I’m going to be manipulating it as I demonstrate the CRUD operations, I’ll show it here so you can refer back to it. It consists of an un-ordered list to show pictures currently in the library, a small form for edit/delete, and a div with some structure to implement drag and drop files.

As I process the read operation and shove list items into the un-ordered list, I’ll also add some hidden data- attributes to the item to store things like the title, description, id, and etag, that will be needed for other CRUD operations later on, so a list item will end up looking like this:

I wanted to do this tutorial without any dependencies, which isn’t that hard but doing Ajax with nothing but XMLHttpRequest is not fun. I don’t know any JavaScript developer who would argue otherwise. So the first thing I’m going to do is wrap XMLHttpRequest in a function called ajax, which takes in an options instance similar to the one used by jQuery’s $.ajax, and converts that instance to what XMLHttpRequest needs to perform an ajax request. The options can specify success and error callbacks, but I do not provide a way to use promises instead of callbacks, since that won’t work in IE without external dependencies. So here is my wrapper:

Creating a document is fairly simple, but there are a number of headers that have to be just so. The code below does the following:

The read operation is a simple GET and does the following:

The update operation is probably the most complicated. First, I need to specify the data as a JSON string with the following format:

The returned entity type from this call is “SP.Data.PicturesItem”. At this point you might be tempted to say “I’m only working with pictures, I can just hard code this.” Not so. The list entity type is unique to the list. So if I had a second picture list in the site, it would be something like “SP.Data.PicturesItem2”. So if you want your code to work with any picture list, you need to retrieve this programmatically.

Also, this code is asynchronous, and so is the update method. So I either need to do nested asynchronous calls or get this on startup. Since I only need to get this once, rather than for each update, I get it on startup by wrapping it in some initialization code like so (the function just populates the global listItemEntityTypeFullName):

Now that I have the list entity type, I’m ready to talk about performing an update. The code is below, and it does the following:

And last but not least, the delete operation. There isn’t much new here, except:

That’s it for basic CRUD operations on SharePoint documents. In my next post, I’ll redo the ugly SPA using fetch, which will get me back to using promises. The complete source code for the ugly SPA is attached. Just make sure you have a picture library with Pictures as the title, or change the listTitle variable defined in the code. Then drop it in a document library and click on it to play around with it.