​ Skip to content
In this post I’m going to write a more full-fledged CSR implementation, in that I’ll do the rendering and override template behaviors to deal with that rendering. It will be a simple rating field that let’s the user rate an item with a value from one to ten. I’m also going to override most of what you might want to override when implementing a display template to modify a form field, as in the NewForm, EditForm, DisplayForm, View, and OnPreRender callbacks plus Validation. So far, all of the CSR display templates I’ve shown for modifying form fields have been fairly evil. At least from Microsoft’s point of view. The reason is that I haven’t actually rendered anything, I’ve let SharePoint do the rendering and then manipulated the DOM afterward. In general, Microsoft would say, if you didn’t render it, don’t touch it. I can see their point, but then again if SharePoint gets me 80% of my customers requirements and I have to hack it a bit to get the other 20%, I’m not too proud. The code is just going to allow the user to enter a rating, as in a number from one to ten. And through CSS, it’s going to color-code the value. I’ve added a field called rating to the form, of type number. In the new and edit forms, it will be color-coded on the form load event for the initial value, and also re-colored on change (meaning on focus lost). In the display form and views, it will just get a color code when initialized with a value. The colors are green (for values 8-10), yellow (for values 7-6) and red (for anything below 6). So here is an edit form with the rating template: 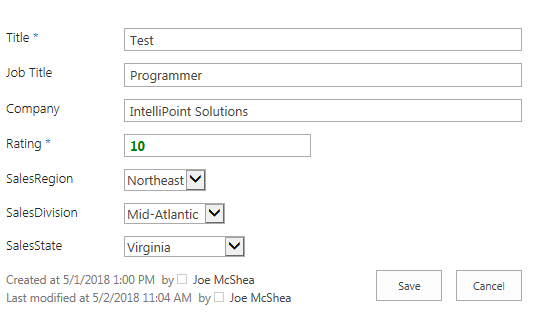 And here is a view with the rating field: 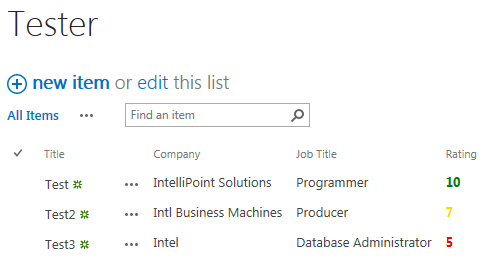 This template is going to be what I called a dynamic CSR template in my last post, meaning the code will be added to IntelliPoint_ClientTemplates.js, and administrators will be able to associate this CSR with Number fields using the browser by going to SetCSRConfig.aspx. Ideally, neither the overrides building code in IntelliPoint_ClientTemplates.js nor SetCSRConfig.aspx should have to change as I drop in new CSR templates. The reality is that I did need to make a couple of changes this time to accommodate things I didn’t need before, and they are:

With these changes, no changes were required in SetCSRConfig.aspx in order to accommodate the new template implementation.

Here is the code for the dynamic CSR template for the rating fields. The implementation’s for the three callbacks which will be called by SPClientTemplates have been removed and will be shown and described separately below.

If you’ve followed along with the series, this should look fairly familiar, so I’m just going to mention a couple things that are different from previous posts.

Below is the SetCSRConfig.aspx page with our new template added to the template implementations. Note the pencil icon is disabled because there is nothing to configure: 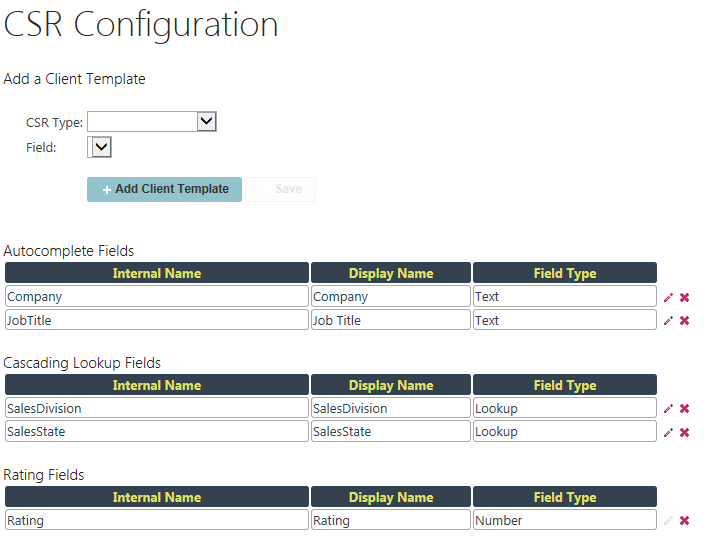 Here is the pre-render callback:

This method just prepends some CSS onto the body of the HTML document. A lot of samples, like those from Office365 Patterns and Practices, insert a link into the head and load their CSS from an external file, which technically is a best practice but it leads to a very jumpy form. The HTML loads and then sometime later the browser gets the styles and everything changes. By embedding the CSS in my JavaScript and then shoving it into the page, my styles are there before the HTML and it’s a much more pleasing experience for end users. And with the help of a trick from Andrey Markeev I embed the CSS as a multi-line comment, which makes it easy to do the CSS in a separate file with syntax highlighting and IntelliSense, and just copy it here when I’m done. If I have a build process like Node/Webpack, I could even automate keeping these in sync.

And here is the NewForm and EditForm override for rating fields:

JavaScript
It does the following:

Now here is the callback for DisplayForm and View for rating fields:

Not much to this one. It just returns some HTML to view the field value, using the same value2Class method used in edit to determine what color the field should be. Keep in mind that the context is different at different points of the life cycle and also in different forms. The edit callback used formCtx.fieldValue to get the current value, but here I use the somewhat more complex syntax ctx.CurrentItem[ctx.CurrentFieldSchema.Name]. The reason is that formCtx.fieldValue will work fine for DisplayForm, but it is null on Views; ctx.CurrentItem is available on both forms and views.

And last, but certainly not least, is the registerValidation implementation for rating fields:

JavaScript
And it does the following:

I’ve now covered all of the override callbacks from my rating field overview. I’ve also called the form context registered callbacks except registerFocusCallback and registerHasValueChangedCallback. And to be honest, I’ve never used either of these and have never seen any bad side effects caused by not using them. I guess someday I’ll have to go back to CSRSpy to try and reverse engineer what these are for, because I’m not holding my breath waiting for documentation. Anyway, if I want to be notified for focus events, I usually just attach my own deferred event handler. And while registerHasValueChangedCallback seems like it might be useful, I haven’t seen any documentation explaining when it gets called.

This pretty well wraps up what I wanted to cover regarding using Client-side Rendering to modify SharePoint forms. If I write any more posts about form templates, I’ll probably just describe what the thing does and attach the source with no detailed explanation of the code. Armed with the knowledge in these 6 posts, and the various posts I’ve referenced, you can now do pretty much anything you want with CSR form modifications, limited only by your knowledge and skill with HTML, CSS, and JavaScript. At some point I’ll write some more posts about View display templates, search display templates, and combining CSR with setting JSLink on content types.